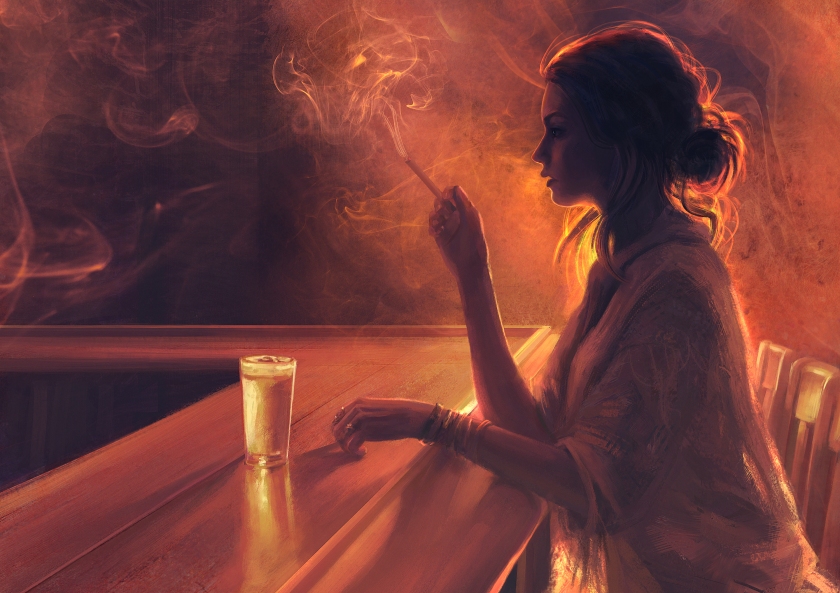 I’ve always been my favorite companion. I want to be by myself the majority of the time. After I’ve been around people I have to go home and pace around until I calm down and sometimes this can take hours. I enjoy most interactions with the people I choose to meet with, but like I said in my last post, people’s treatment of me varies a bit. So it’s always a gamble.

I know that being a woman who goes about her life solo is it’s own kind of oppression.

I go on vacation alone, to restaurants alone, to movies alone, to museums alone, to concerts alone, to bars alone, to community events alone. ALWAYS. This is highly unusual behavior even in our “post-feminist” landscape. I see all the “independent woman” memes and cringe though. We give a lot of lip service to being strong women who don’t care what other people think about us, but the truth is that most women, and men, still see an unaccompanied woman as bizarre, tragic, lame, and sad. 1000% of movies with “strong female leads” have her hooking up with a partner and having at least one quirky best friend.

Since I have been alone so much in public spaces, I know how differently I am addressed both when I am “with” someone and when I’m not. And then there’s how people treat a woman who is known to be habitually alone. We still burn witches, after a fashion. There are  archetypal and patriarchal explanations for this, but I won’t get into all that.

Being popular and having people desire your company while you desire theirs is the default social goal of neurotypical people. As if everybody is the gregarious kind.

It’s strange to see people out in pairs and groups, looking at me with either petty pleasure or condescending pity when they see me out by myself. Paradoxically, I look at them and I feel so sad that they have to be accompanied in public to enjoy themselves. I feel people can be a distraction if I’m looking at art, watching a movie, or listening to a band. Even eating a meal with others can ruin the experience. Why would I want to pay for fancy food or an overpriced movie ticket if I have to try to hold up a damn conversation that distracts me from savoring the reason I’m there?

Think I’m kidding about the bad treatment? Nah. There’s the little stuff like every hostess saying “just one?” when I come in. Then there’s the big stuff like being followed by strange men when I depart somewhere. And the medium stuff is how I always get shit service when I sit at a bar by myself. Or how people see me conducting my life solo and assume I have low worth, social or otherwise, so they don’t hear me when I speak and shut down any sort of communication.

The core of female identity is based on our interpersonal relationships, not our individual merits. Every little girl, socially impaired or not, picks up on this very early as if our lives depend on it. Because our lives do depend on it. Women have to rely on more protective layers of society in order to survive because, well, all the rampant gendered violence. And poverty, etc. Just as a white person will never quite understand the anxiety of getting pulled over like a black person, a man will never know the anxiety of being a woman out by herself. Or living by herself.

Isolation can be a death sentence for a woman.

A single woman with no children is practically a non-entity. Unless she’s young and hot or has a high-powered career, why is she even here? What’s she good for? Get the torches and pitchforks!!!! Think I’m kidding again? I applied for TennCare once and they called me back and the only question I was asked was, “Are you pregnant or do you have a child?” I said no and that was the end of the conversation. They don’t help jobless single women without children. No one does.

A rule of thumb in social theory is that if you are a woman – ANY kind of woman from any group or background – and you don’t conform to a degree that isolates you, you are generally in danger of poor childhood and adult outcomes. Women are expected to be accompanied in spaces where social activity occurs. When you are not, the freaks looking to separate the “weak” from the herd perk right up and even kind people do not know how to address you respectfully.

A week ago when I started writing this I had far more hope for changing how society and power structures view independent, intelligent women, but damn if this isn’t a painfully disappointing juncture in history. Whether you have the protection of a social circle or not, take care of yourselves out there, and keep your chins up!