Full text of column: Athletes shouldn’t protest cops, they should partner with them (The Tennessean, September 21 ’16)

“Much has been said about NFL players kneeling to protest racial injustice and police brutality during the national anthem. And San Francisco 49ers quarterback Colin Kaepernick has been at the forefront of the movement.”

Somehow, I think you are going to say more. After all, this is the news mag of record in Tennessee. How bad could it it be? Nashville has made great strides in joining the mainstream in recent years.

“To any professional athletes who share Kaepernick’s concerns, I say do not protest the police. Partner with them. Work together to find a solution.”

That’s OK. Lots of guys from a “law enforcement background” have difficulty seeing things from the opposite point of view. He thinks it is incumbent upon the people to “be the bigger person” and initiate a pas de deux with the sprawling criminal justice complex to somehow, vaguely, partner with law enforcement to get them to view the populaces they police differently. I wonder what message that campaign might have.

“. . . law enforcement would rather be a positive influence in communities than use force to address crime.”

Then why do they look like they are so into it? 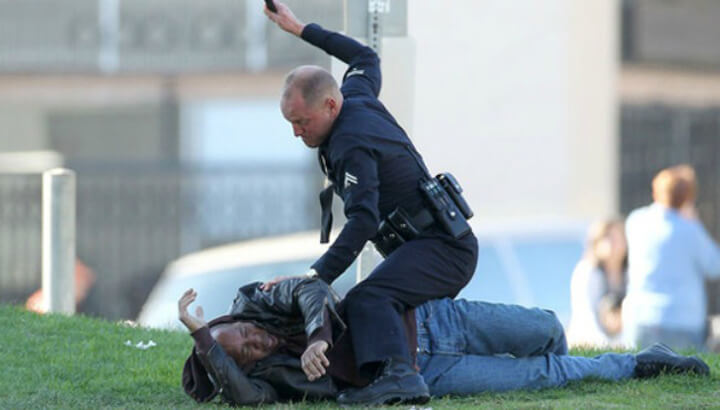 “Today’s climate of anger, acerbic rhetoric and finger-pointing will solve nothing. Neither will the violent protests and rioting that took place Tuesday in Charlotte, and that have happened in many other cities this year.”

If the cause is just, then outrage, biting rhetoric, correcting the blame, and protesting are the only things that change policy in a rigged legal system. Very recent, recorded, and highly celebrated American history has proven this to be so. Since police departments all over the country have decided to be less than transparent with evidence, and untouchable by the rule of law, then poor populations of people who have been disenfranchised by the system they are protesting will have to inconvenience those who perpetuate the problem.

“As a father, former detective and American, it also grieves me when I read about the violence in Chicago — young people, parents and the elderly caught in the crossfire of gangs. All part of a growing American tragedy.”

Thanks for dropping this here to bring up a different subject.

Before athletes speak out about complex law enforcement issues they might not understand,

They are mainly protesting condescension in all its forms! The idea that they don’t know what’s good for them and you, without demonstrable empathy, do know exactly how to address a problem. When you are the problem no less. They call it “flippin’ the script” in the neighborhoods you police the most. It’s as insulting to athletes as it is to black people. Athletes don’t know how to think about social issues? I beg to differ. There are lots of intelligent athletes. Good Lord, I’m scared about the rest of this sentence.

” . . . they should spend time with law enforcement officers going through training simulations and experiencing the split-second reality of policing. This would greatly help athletes understand the challenges and dangers confronted by law enforcement. It has been shown that civic leaders who have been through simulated police experiences leave with a different perspective.

So. Go out of your way to understand how right law enforcement is to use force. Understand how pumped you can get after a chase. Understand what it’s like to have the law on your side, rather than codified against it. Understand us even though we signed up to understand you and your motivations. After all, who’s the professional here? Pro athletes. Not the guys with official-looking badges and uniforms worn off the field of a game.

“But some youth, for various reasons, have come to see the police as their enemy, and too often an us vs. them mentality develops.”

First of all, look into those various reasons real close. So the youth, some of them, are the only ones with an “us vs. them” mentality? They are to blame for police militarization and not a really specific act? And white cops policing black communities when black cops would have a better chance to bond with those much-mentioned troubled youth was the kids’ idea?

“Athletes, through their charitable foundations, could create community centers that give kids access to sports, job training, mentoring and parenting classes to help build stronger families.”

Again this requires more effort on your end, athletes. Though very few of you ever attain the wealth to do this, let it be your responsibility to improve the terrible state of people in your part of town. No quid pro quo here.

“We can do more side by side than we can screaming at each other and disrespecting our nation. If those who protest want to make a change, let’s come together as Americans to build a bridge, serve families, and save lives.”

Policing is about building figurative bridges, serving families, and saving lives. Athletics is about winning a contrived competition on a field of play. What were you going to do again in this partnership, cops? Other than do your job ethically and skillfully, which you presently are not. I’ll wait.

And I find it hard to believe “our nation” will get its feelings hurt, or get tased, or have its breath cut off, or have its heart stopped by a bullet. The police aren’t just screaming – they’re murdering and injuring and degrading. Words won’t hurt you, boys in blue, but night sticks and fists and fines and powerlessness will every time.

“I am ready, and my brothers and sisters in blue will join me. Will you?”

Take us by the hand. We only await your complete compliance.

This is a text widget. The Text Widget allows you to add text or HTML to your sidebar. You can use a text widget to display text, links, images, HTML, or a combination of these. Edit them in the Widget section of the Customizer.
%d bloggers like this: